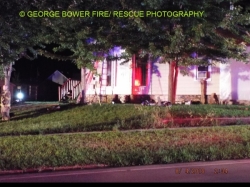 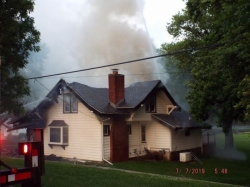 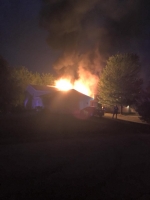 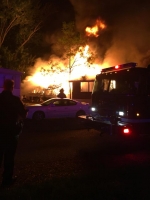 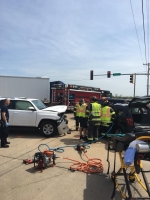 The South Beloit Fire Department was dispatched for a two vehicle accident at the intersection of Gardner St and Willowbrook Rd on May 8th, 2018 at 2:07pm. Chief Davenport arrived on scene with the So...
Read more »
News Headlines
Firefighter Instructor II Certification
Thu. Feb 4th 2021 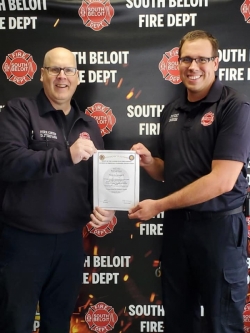 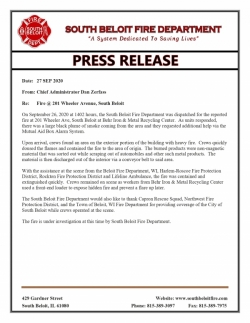 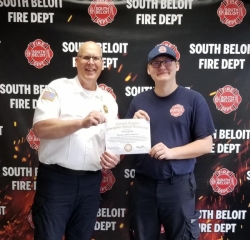 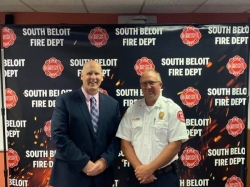 Most of you know that Chief Michael Davenport will be retiring on Monday, August 31st after 33 years with the South Beloit Fire Department. All of us are sad to see him leave, but wish him an amazing ...
Read more »
News
Chief Davenport is Retiring

Brian Hedrington, who serves as health and public safety commissioner on the city council, will be in charge of a search for a new chief for the fire department.

34 entries in the News

Last night at the city council meeting Dan Zerfass was sworn in as the next chief of the South Beloit Fire Department. Chief Zerfass has been chief since September 1st, but was finally able to be sworn in on Tuesday, September 8th. Chief Zerfass comes to us after recently  retiring from the Highland Park, IL Fire Department after 30 years of service. We are glad to have him here as Chief, and look forward to great things that he will do for the department and for the members. Welcome to the So...

Congratulations to Firefighter Austin Edgington on passing his National Registry Emergency Medical Technician-Basic exam. We are proud of all your hard work and dedication, working towards your EMT certification

Most of you know that Chief Michael Davenport will be retiring on Monday, August 31st after 33 years with the South Beloit Fire Department. All of us are sad to see him leave, but wish him an amazing retirement! He has been an amazing chief over the past few years, with everything that has been thrown at him. But it’s time for him to pass on the legacy of leading the South Beloit Fire Department to a new chief. Last night after 3 new part-time firefighters were sworn in by Chief Davenport,... 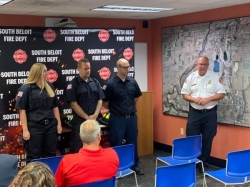 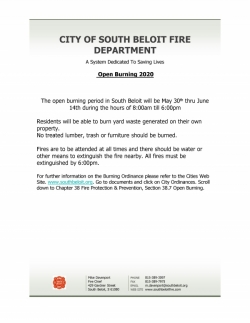 The open burning period in South Beloit will be May 30th thru June 14th during the hours of 8:00am till 6:00pm

INFORMATION STATEMENTThe City of South Beloit Fire Department prides ourselves on making sure we protect the citizens of South Beloit and our members the best we can. Due to the recent Coronavirus (COVID-19) threats, we will be limiting the visitors that come to the fire station. We are limiting it to visitors on official business with the department. If you do come to the fire station we may ask you to wait outside while we talk with you. We also ask for you to use the door located on the ... 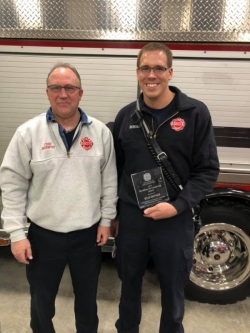 Congratulations to FF Ryan Donner on receiving the South Beloit Fire Department’s 2019 Excellence in Leadership Award. Ryan was unable to attend our annual awards dinner. This award is presented to him for his constant dedication and exemplary service. Thank you Ryan and keep up the good work!

We started the year 2020 off with a bang as well, our first call of the year was dispatched at 12:01am. So already 2020 is looking to be another busy year. We want to send out a big thank you to our neighboring fire departments that come assist us throughout the year! 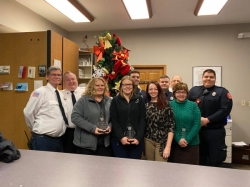 At tonights’s City Council Meeting, Chief Davenport and SBFD had the honor of presenting Citizen Life Safety Awards to three employees of Rock Energy Coop. These ladies played a vital role in saving the life of a co-worker who had sudden cardiac arrest by calling 911, starting CPR and applying the AED on hand at Rock Coop’s office. Congratulations to these ladies and thank you to Rock Coop for giving your employees the training they need.Also, several members of SBFD present for this... 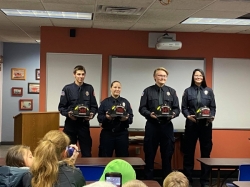 Tonight we held the swearing in and badge pinning ceremony for four paid on call personnel. Congratulations to FF Hosey, FF Henthorn, FF Mrkvicka and FF Edgington. Thank you for all of the time you have already dedicated in becoming members of the department and continue serving as role models to the community you have sworn to protect.

The open burning period has been extended thru May 31st  The open burning period in South Beloit will be April 2nd thru May 31st during the hours of 8:00am till 6:00pm Residents will be able to burn yard waste generated on their own property. No treated lumber, trash, or furniture should be burned. Fires are to be attended at all times and there should be water or other means to extinguish the fire nearby. All fires must be extinguished by 6:00pm For further informa... 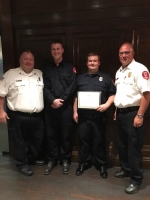 Congratulations to FF/EMT-B Max Rude for graduating from the OSF St Anthony Medical Center Paramedic Program today. Max has been in class for the last 9 months. We are all very proud of you. Thank You for your dedication.

Recruits from the South Beloit Fire Department graduated from the Rockton Fire's Recruit Academy. The academy ran from January 2018-June 2018 and encompassed over 250 hours of classroom and hands on training. Congrats to Firefighters Jane Hanebuth, Brooke Popkin, Jacob Cunningham, and Julia Smith on completing the program. Thank you to the Rockton Fire Department for allowing our guys to attend the academy. 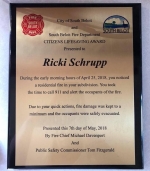 At tonight’s South Beloit's City Council Meeting, South Beloit Resident Ricki Schrupp was presented with the Citizens Lifesaving Award for his actions on April 25th, 2018. While he was on his way to work he noticed a house on fire and called 911 and then stopped at the house and woke up the residents. It’s because of his actions that the residents were able to escape uninjured and the fire department was able to contain the fire to the exterior of the house.

Open Burning Period April 1st – May 31stThe open burning period in South Beloit has been extended to May 31st during the hours of 8:00am till 6:00pmResidents will be able to burn yard waste generated on their own property.No treated lumber, trash or furniture should be burned.Fires are to be attended at all times and there should be water or other means to extinguish the fire nearby. All fires must be extinguished by 6:00pm.For further information on the Burning Ordinance please refer to t...

We are proud to introduce South Beloit Fire's newest full time member Nick Miller. Nick joined the department as a recruit in 2014. After successful completion of our recruit academy he was brought on as a part time Firefighter/EMT. Nick became a paramedic in July of 2016. Joined by his wife Michelle and kids Nicky and Cecilia he was sworn in by city officials and Fire Chief Mike Davenport. Congratulations FF Miller!

The South Beloit Fire Department recently received a grant from Illinois American Water to purchase water rescue equipment.The IAW 2017 Firefighter Grant Program provides financial assistance to fire and emergency organizations serving communities in its service areas. This year, approximately $75,000 will be awarded to 78 Illinois fire departments. Since the program was created in 2010, more than 425 grants totaling more than $417,000 has been awarded to fire and emergency organizations serving...

34 entries in the News 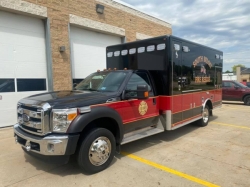 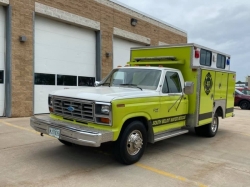 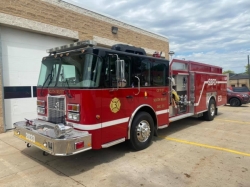